Everybody plays them - beginners and experts. Learn more about why so many professionals use them in all of the various genres and how you can bring your playing to the next level. That separates the boys from the men.

Power Chords work perfectly on the guitar, especially in Rock, Metal, Blues, or even Pop. Technically, it consists of the root tone and the perfect 5th above. So, the critical part is that it doesn't bring in scale tone 3 (or -3), and for that reason, it creates a very open and transparent sound.

Let's step into some of its characteristics.

Power chords can be traced back to commercial recordings in the 1950s. Robert Palmer pointed to electric blues guitarists Willie Johnson and Pat Hare, both of whom played for Sun Records in the early 1950s, as the true originators of the power chord, citing as evidence Johnson's playing on Howlin' Wolf's "How Many More Years" (recorded 1951) and Hare's playing on James Cotton's "Cotton Crop Blues" (recorded 1954).

The Structure of Power Chords

To understand the structure of the power chord, let's have a quick look at the Overtone Series (OTS) as it clearly shows the register where this structure is used most often and most effectively.

All the action with power chords starts in the 2nd octave. That's the moment where scale tone 5 comes in for the first time. The fundamental is always most prominent as it appears in all of the octaves. Scale tone 5, however, is the second strongest tone in that series. The whole vertical structure becomes even more substantial when we double the root tone in an octave above, and this is how we get to three notes in our power chords.

Before we go any further, let's bring in a chart of all the power chords over all the various root tones available on the guitar. 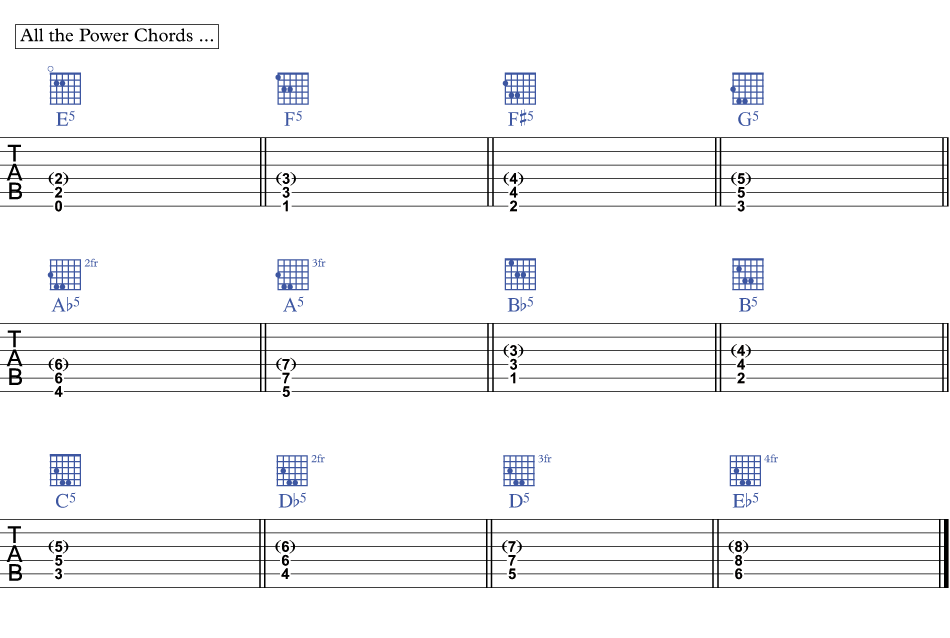 Please have a look at all of those shapes from above. They never change. Usually, you don't apply any voice-leading rules to the chords but move them around in parallel. Power chords are strong in their stability and sound, and so, they work best when used in parallel (that's coming from the OTS).

The notation of power chords is simple, and you only have to add the number '5' to the note that you want to use as the root (like C5, A5, and so on).

Please note that there are different positions of the same power chord available on the guitar. For example, you can play the A5 on the lowest E-string or the A-string. We've chosen the E-string above so that we avoid using the open string as it is harder to control. However, using open strings can also be turned into an advantage. It depends on the context and changes the character of sound slightly. In the end, you make the choice.

The three notes (root - scale tone 5 - root above) create two intervals that we can both determine in the 2nd octave of the OTS. That's a "7" (a perfect fifth) and a "5" (a perfect fourth).

Note: When we talk about intervals, "5" stands for five chromatic steps between two notes. Using those numbers to describe distances is specific, and part of the Interval Theory that we teach at the Academy. Diatonic intervals, however, are not precise, and therefore, one needs to give further information like 'major, minor, diminished, or perfect,' and so on. This terminology can be quite confusing, especially to beginners, and therefore, we'll simply stick to numbers throughout all of our materials.

Let's jump into the actual intervals a bit more. When you look at the intervals (5 and 7), it's pretty apparent that they add up to 12, that's the octave. Hence, they are complementary intervals. Instead of moving parallel all the time, let's try to interchange them, one for another.

For that purpose, let's start with a little line first and use that line in conjunction with 7s, or 5s, or both! That will give you some creative ideas for riffs and patterns. 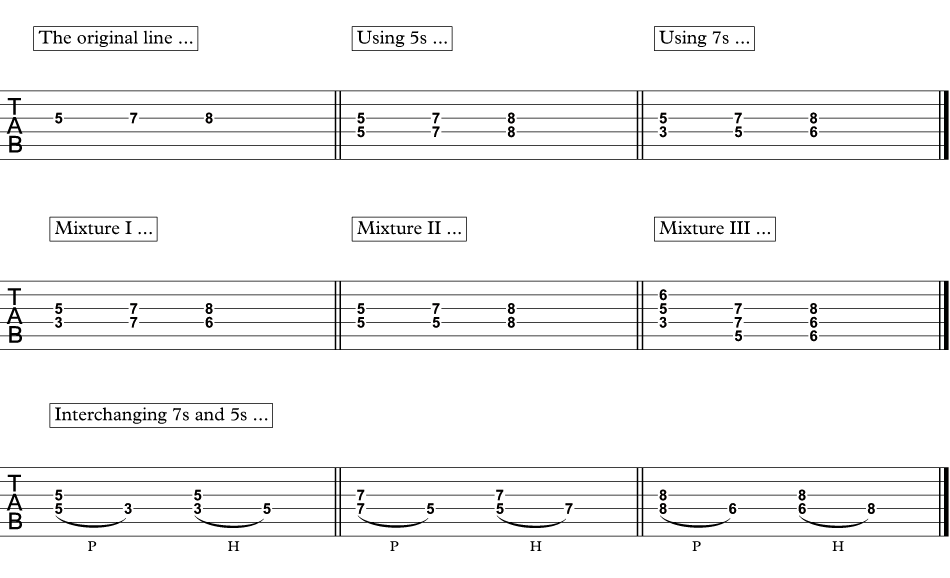 In the video below, TC demonstrates all of these examples. You can use "hammer-ons" (H) and "pull-offs" (P) to transition between 7s and 5s quickly while sticking to the other note.

Harmonic Connection between 7s and 5s

Now that we know how 7s and 5s work together in the application let's have a quick look at the theory behind it.

The OTS comes in very handy when we want to figure out what the root tones of these structures are. Again, let's bring up the 2nd octave of the OTS as we'll find the answer in there.

With that knowledge in mind, let's start with a C5 power chord and play only the 7-interval (C and G). This makes the bottom note the root tone. If we wanted to move into a 5-interval while holding one of the notes involved, we have two options:

Ok, so we have two 5-intervals now, but what are the actual root tones? Remember, in a 5-interval, the top note is the root!

Maybe you already knew this but if not, put this into your personal 'bag of tricks'! 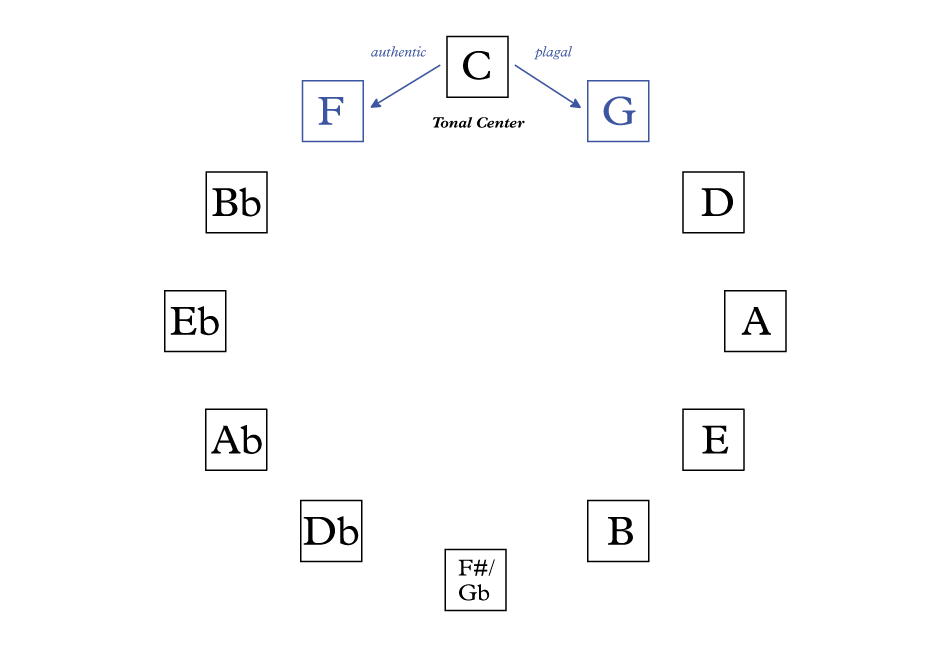 If you know in what way the roots of your chord progression move, then your solos will be better as your scales will slightly change with the roots - but that's a different topic. For now, keep in mind that interchanging 7s and 5s equals step-wise movement on the Circle of Fifths (these are authentic and plagal cadences).

You might also want to get into the article about Chord Progressions on the guitar as it perfectly demonstrates how authentic and plagal cadences make up a tonal center.

Clean or distorted - What is better?

Power chords are played with and without distortion, but what is better? The short answer to this is: Both work great! But let's be a bit more specific about why that is.

When you look at what distortion does to the sound, it quickly becomes apparent that it enhances the overtones of your original frequency spectrum. That's why the tone becomes brighter when you add distortion to it. You simply help your frequencies to project into the higher register, following the shape of the OTS.

So, if you pick an interval from the lower spectrum of the OTS, like the octave, a 7, a 5, or even a 4 (that's the major third), distortion works pretty well. That is also the reason why almost all songs in Rock use major chords because the OTS does not cover minor triads over the root. Hence, distorted minor chords don't sound right to our ears.

But as power chords only bring in the root and scale tone 5, you won't run into any problems when adding distortion to the sound. It's also a matter of style and the musical genre that suggests how much distortion you will want to use. If you are in doubt, use your ears and focus on your emotional reaction to the sound you play.

That's how you'll develop your unique voice and taste!

I'm pretty sure that every guitar player came across power chords at some point. They are easy to play, work in every chord progression, and can produce a decent and juicy sound. It would be best if you took full advantage of them, and therefore, here's a quick summary of the points covered in this article:

If you are new to power chords, make yourself familiar with them by picking some songs that heavily rely on power chords, just like "Smells like Teen Spirit" by Nirvana. Power chords are also an entry point into more advanced elements on the guitar, and we are going to cover those in a dedicated article as well. For now, play them and enjoy them!