​We will have a look at "Take it Easy" by The Eagles. You will learn the basic chords that you need to know in order to play this great song but more importantly, you'll learn some great secrets that will level up your playing skills ​and your understanding of how the guitar works.​

Jackson Browne and Glenn Frey wrote the song "Take it Easy" together and released it back in 1972. [source: ​Wikipedia]

There are hundreds of people out there giving you examples of this song. For that reason, we'll go through the actual chord progression a bit quicker and focus on some of THE SECRETS in more detail later in that article!

Fun Fact: Did you know that the composers were neighbors who could hear each other through the wall? Glenn Frey could listen to Jackson Brown struggling with a section of this song, and so they ended up collaborating to write this now-famous tune. [source: ​Songfacts.com​]

The Chords and the Chords Progression

First, learn all the various chords shown below and get familiar with strumming these separately. Be sure you understand how to read the Tabs and the chord diagrams, as these will make your learning much quicker. The Tab tells you which string and which fret to press.

Example: The first G chord is played by holding the strings down where you see the black dots. The '0' indicates an open string on the guitar. Here are all the chords you need to play this great song.

​And here's even a short demonstration from TC so that you can listen to the chords.

All the chords are quite simple to play, and that is part of why this song is so famous. Simplicity very often is part of success, but composing songs like this one is actually NOT easy. It's all about framing the proper context for these simple chords so that the audiences can relate to the song emotionally.

Let's go into the chord progression. At letter A, you see the first part of the song. Take your time to find your way through the sequence of chords. It's all just a coordination of what you've been practicing already above. 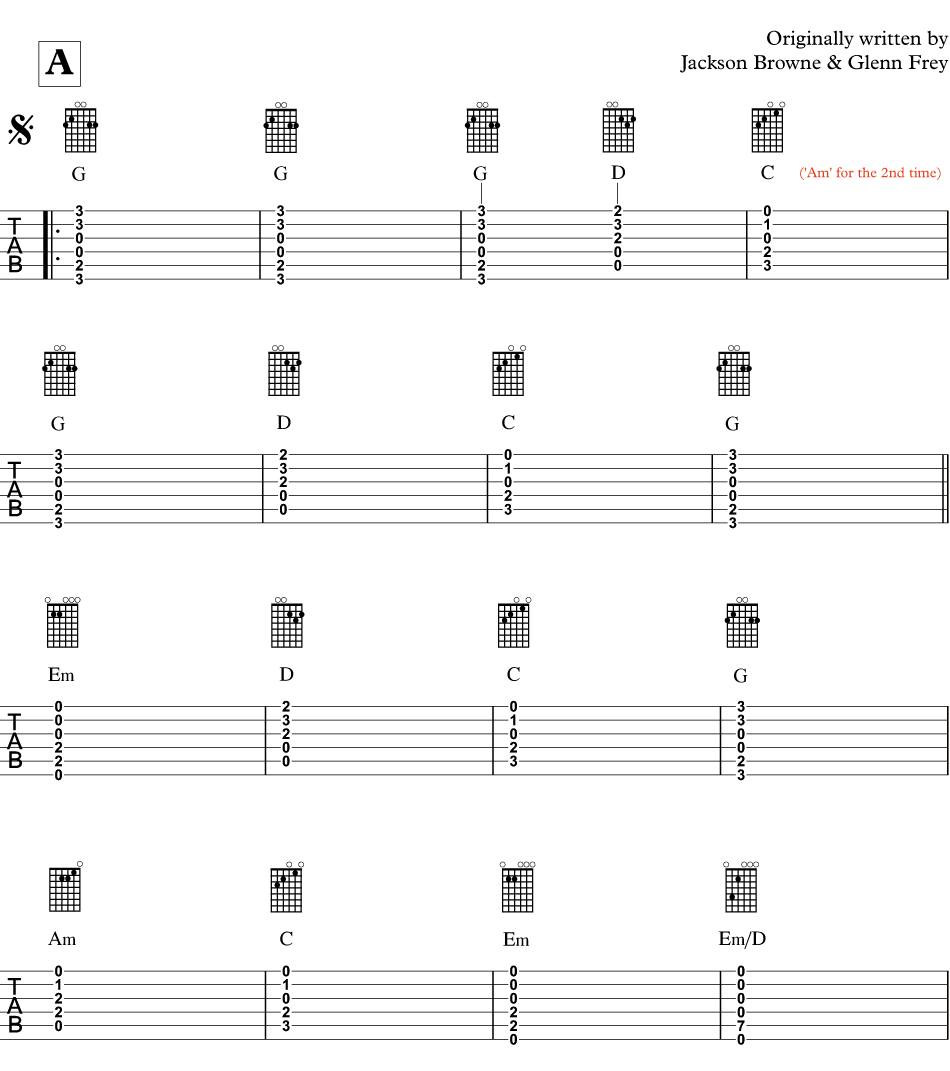 ​Now, let's watch TC demonstrate rehearsal letter A which gives you a big junk of the progression already. Actually, you can use this video to play along with TC for practice purposes. (You can watch or even download the PDF of the chord progression.)

Once you know how to play letter A, the rest will fall into place naturally as the chords all repeat. TC has also prepared a short video that shows the complete form of this song. It's written in an ABAB form with some guitar solos and licks as fillers. You can also download the PDF right here so that you can practice everything at your own pace at home!

​The Secrets of "Take it Easy"

​Probably you are curious already. So, what do we mean with "the secrets"? We want to take the basic simple chords and turn them into delicate and very rich-sounding structures. This will be the greatest thing ever for the beginning guitarist.

We want to arm you with everything you need so that you can start to write your own songs. It can be very time-consuming and frustrating to figure these things out on your own without any help or support.

At letter E, we are looking at the giant G major chord. Now, have you ever tried to reduce that vertical structure to four notes and move your first two fingers around without doing anything else? This creates beautiful sounds that you can use for introductions or endings.

​In the video below, you can watch TC demonstrate how easy it is to create these sounds. The only thing you have to do is sliding your hand around the guitar neck. You'll discover tons of ideas this way.

​One of the great secrets on the guitar is the use of the open string or strings! The secrets are easy to discover if you take a few minutes and experiment with some of the chords you already know. Let's take a look at another example. Here's the C major chord. See what we can do with that vertical structure by moving our hand up the guitar neck?

​Here's a short demonstration of how that sounds (even in other positions).

​And we even go into a beautiful bonus trick that you can apply immediately to your playing. From the G chord, you can also take individual components that include one open string or more, as shown at letter F.

​Try moving your hand around while letting the open string(s) ring. Again, that's one of the creative things that you can do easily on the guitar.

We hope that this spices up your playing and your understanding of music theory on the guitar!

​The Eagles - A little bit of their background

​The Eagles were so popular because they told stories, their chords were simple, and the harmony was always beautiful.

Glenn Frey and Don Henley were the members who lasted the longest and who had some success as a solo artist once the Eagles broke up. As a Southern California band, the Eagles' laid-back grooves reflected Glenn Frey's love for Country Rock music. Many stars influenced Frey, including author Jack Kerouac, actor James Dean and, of course, Elvis Presley.

Frey was never a folkie-style guy and at the age of 16, was becoming a Rock & Roller. Some of the influence Frey had during his Rocker period was indeed due to the tremendous attraction the girls had for him on stage. It wasn't until the Beatles were on tour in 1964 and when Frey saw them play in person that Glenn decided to get into the guitar.

At that time, he bounced from many Detroit bands, including the "Mushrooms," where he began to get some attraction on a television show Robin Seymour's Swinging Time.
The Mushrooms were regulars on Seymour's show.

His first hit single was "Such a Lovely Child," for Hideout Records produced by Bob Seger. Frey eventually had enough of Detroit, and it was when he met in California John David and partnered in a composing and publishing deal where he began getting into Country Rock.

The band Longbranch Pennywhistle missed its timing on a commercial level but eventually got signed. Frey had some very talented company in this band, which included Ry Cooder, Doug Kershaw, Joe Osborn, and Larry Knechtel on piano.

While making the club scene, Frey eventually met Jackson Browne, who was responsible for getting him into the Linda Ronstadt band. Browne and Frey shared a house, and Browne can get much of the credit for getting Frey going. The Eagles were born in 1971, and the two who quickly became the commercial ears of the band were Frey and Henley.

The Eagles, like most bands who have such a commercial success, also had its problems, and the group soon had two factions, Frey and Henley, Walsh, Felder, and Timothy B. Schmit. In 1982, Frey and Henley put the band on hiatus after many stadium tours, hit singles, and multi-million dollar success.

​It's quite fascinating to see how much variety and musical beauty can come out of these simple chords. You want to use the best from both worlds - the color and richness of sound from the techniques shown above combined with the simplicity of the original chord progressions. That's how you can touch your audience emotionally!

​Make sure you can play and transition between all of the chords from this song in any given order. This will let you perform hundreds of other songs. That's a fantastic starting point for bringing in the techniques explained in this article.

​​​TC is one of the most successful composers in the area of animation and has a great passion for the guitar.​