The Harmonic Series & the Circle of Fifths

The Circle of Fifths is the basis of the most-used chord progression ever (ii -- V -- I). You probably can't go wrong by sticking to the steps of that circle. Also, the Harmonic Series is an essential observation from nature. It describes a set of overtones that our ears got used to over the time of evolution. Hence, it sounds very familiar to us and helps us organize notes on paper and even sound sculptures. But that's not all!

Understanding the Harmonic Series in Music

In nature, every note you sing or play on an instrument creates a set of overtones. This sequence of harmonics is unique to the sound source and defines the color of it. That's how we can distinguish the sound of a clarinet from a viola or even a singer.

The pitch of a note is determined by the fundamental, that's the lowest note of the Harmonic Series.

The Harmonic Series (or Overtones Series) is an observation from nature. The fundamental and its overtones always come as a unit and can't be separated (without technology).

To the human ear, the Overtone Series (OTS) sounds very familiar as it has been around (literally) forever! Therefore, we like the sound of it; it feels like home to us. That's a tremendous insight for the composer and orchestrator, as we can use the characteristics of this sequence for musical storytelling! And this does not only imply sticking to the OTS but also going against it!

You've probably heard many music instructors dwell on the importance of the OTS. Maybe you've even been told to learn it by heart, print it out, and remember it forever. Well, although this is good advice, the essential part of the puzzle is still missing, and that is the 'WHY'!

WHY is the OTS so important in music, and WHAT is my benefit from it as a composer?

The Strength of the Intervals on the Harmonic Series

Maybe you've heard that the composer should avoid parallel octaves and fifths in classical choir writing.

The reason for that is quite simple: They melt together very nicely so that the audience might get the impression that the number of voices decreased - and that might confuse the listener.

Put all those rules aside for the moment, and instead, focus on the musical context. We want to gain the power to decide when to follow a guideline and when to break it.

The Harmonic Series shows the strength of the intervals very clearly. As usual, we refer to half-steps between two neighboring tones to describe the distance between them. This way, all the intervals become clearly recognizable by their unique number. Here's a quick chart that shows the relation to the Diatonic convention of the intervals.

In the graphic below, you see the sequence of intervals through the first four octaves of the Harmonic Series. This shows the strength of the intervals. It almost provides a blueprint of how to stack notes on top of each other to create organized complexity!

Now, let's separate the OTS into the individual octaves, and you'll see that each octave projects to the top and repeats itself in every higher octave. 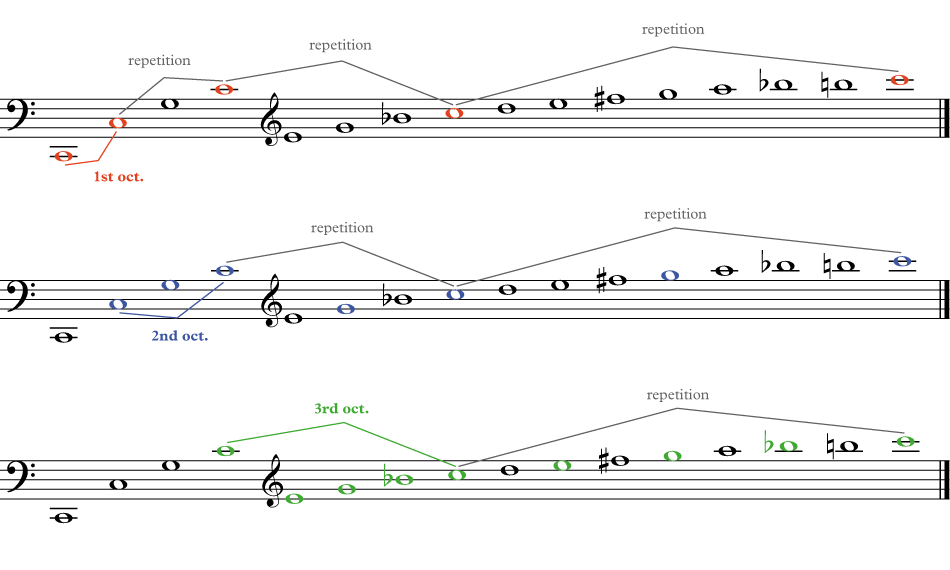 The Dominant Nature of the Harmonic Series

Starting from the third octave (and above), the Harmonic Series becomes dominant. Scale tones 3 and -7 form the tritone-interval which wants to resolve. Please refer to the article about Dominant Intervals, in case you want to dive deeper into that subject.

The shortest explanation possible is that dominant structures want to resolve via authentic cadences, as shown below.

Of course, this resolution sounds very familiar and natural. Both parts on top move chromatically into their final position, just as expected. So, we just played the Authentic Cadence from C7 to the F tonic.

But guess what happens over the new F-fundamental right now? We create the same set of relative overtones above the fundamental. And again, it contains the dominant character!

Now, the F7 wants to resolve to a Bb tonic, and so it continues. In case you've ever wondered why the Circle of Fifths works, here's the secret:

It's the Harmonic Series that shows how the neighboring steps on the Circle of Fifths are connected. The OTS also is the reason why authentic cadences feel more satisfying than plagal ones!

There's a lot more to explore about the Harmonic Series, and all Academy members have access to the ebooks "The Overtone Series" and "Root Cycles" which both go way deeper into these subjects and connections.

There are many ways how the composer can benefit from the Harmonic Series in composition, and we'll explore some of the more creative approaches in dedicated articles. For now, let's keep it simple and stick to the vertical use of the OTS.

Let's voice out a C major triad for the whole orchestra in different ways so that you can listen to how the stability varies. You'll recognize that the closer we stick to the Harmonic Series, the more balanced the overall result becomes.

Just to give a better overview, here are the examples from the video above in the notation format.

Don't shy away from those many notes. Actually, I want you to break down the examples into instrument sections. I've done this already by using color-coding.

However, in the example above, the brass section can be divided into even smaller groups of three voices, that's the trombones, horns, and trumpets. This will help you find your way around.

As usual, we want to give Academy members something special, and this time, I want to expand on the orchestration, including the individual orchestral sections and also inversions.

Orchestration is a combination of technique and creativity. Once you start seeing the unique puzzle pieces of orchestration, it all comes together logically.

Members: Let's talk about the technique a bit more in this content upgrade, so that you can unleash your creativity!

(If you are not logged in, it won't work, but I know you'll try anyway!)

The Harmonic Series is one of your most loyal friends in music creation. Remember the following takeaways and improve on your writing skills step-by-step.

Every octave of the Harmonic Series has a unique function and gives a lot of insight into the orchestration and composition. Start using the OTS vertically before you move into the horizontal approach. It even introduces the whole system of Polytonality from the MITA Composition Course.