The Lydian Scale - The most Natural Mode

Back in school, I've learned to start the seven Church Modes on the Ionian. It's the mother-scale and defines all the other modes. That is what I was told.

From my current understanding of music theory, including the Harmonic Series and the system of Pentatonic, my teachers were not accurate. As we are going to find out in this article, it's not the Ionian scale but the Lydian, which is the most natural one. We'll look into the application and how the Lydian scale bridges to so many different places in music theory - practical knowledge that helps you write music more efficiently and quickly.

The Lydian scale is not an invention by humans but an observation from the Harmonic Series, which appears in nature. It connects to the elements of physics, describes the Circle of Fifths, and even explains Pentatonic. It's one of the most reliable puzzle pieces in music theory, and you, the composer, can pull a tremendous amount of inspiration from it.

The Lydian scale - A Universal Connector

Generally speaking, music theory describes the relations of sound and tones in a way that we observed in nature. It's not an artificial construct that defined its own set of rules; instead, the opposite is true.
So, let's with those concepts and musical ideas that are well-established and proven to be right, and we'll find out that the Lydian scale seems to be omnipresent.

Connecting to the Circle of Fifths

Composers have used the Circle of Fifths to organize notes and create music for the last 450 years or so. Authentic and plagal cadences are part of the standard palette of every music creator in all the various music genres. Now, the exciting part is that the steps of the Circle of Fifths (or Root Cycle 5) follow the scale tones of the Lydian scale.

It's a fair statement to say that the RC5 equals the Lydian scale and vice versa. The symmetry stands out in that it splits the whole circle in half and also the octave. 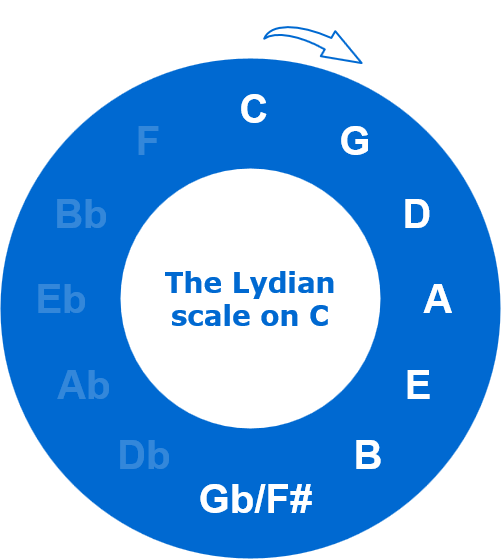 Connecting to the Harmonic Series

In Interval Theory, we bring back a lot of the decision-making and musical choices to the Harmonic Series (or OTS = Overtone Series). It helps us organize the different registers and the complexity of sound. It's fascinating to see that the Lydian scale appears in full as a set of natural overtones in the 4th octave above a fundamental. This is not true for any other of the seven Church Modes!

This single piece of information already tells us a lot about creating and resolving vertical complexity. It can help us stack structures on top of each other or even put existing fundaments in another context, like making them appear more robust or weaker against a given set of tones above!

Connection to the Pentatonic

When we go back to the series of stacked 7-intervals, we see that the first five tones make up the pentatonic major scale (on the same root tone as the Lydian scale)!

Now you see in which ways the Lydian scale connects all the various musical places. But let's stick to pentatonic for a second because there's more to it.

What happens if we picked the second note in the sequence of stacked 7s? Or even the third note? In all those cases, we create a pentatonic major scale, but the root tone differs! 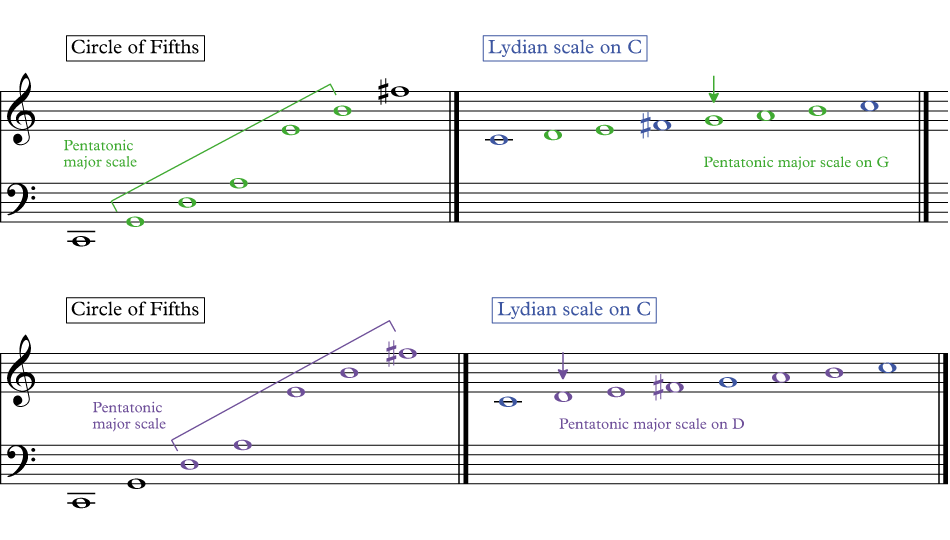 In brief, the Lydian scale embraces three different pentatonic major scales, and they live on the first scale step (the common root), the second, and the fifth!

This idea even opens up the world of Bitonality and combing different scales vertically! In the Composition Course, we dive way deeper into scale changes and combinations, including their applications, but for now, we want to stick to the Lydian mode.

Here's the value of becoming aware of those extended tones. Since there are three pentatonic major scales included in the Lydian, we can use the extended tones to modulate to a different musical key. Here's a short musical explanation of what that means. 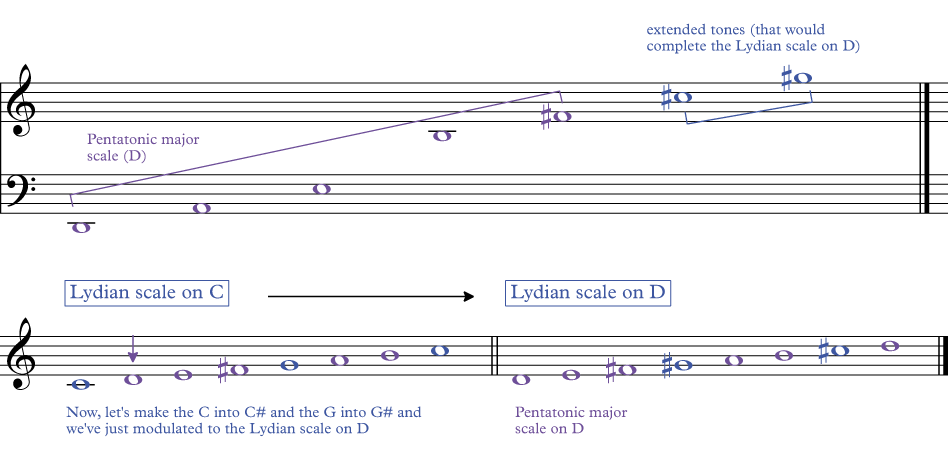 All those opportunities derive from the Lydian mode on C by either altering one or two scale tones chromatically.

Now that we've covered some aspects that show the relevancy of this scale for music theory, let's have a look at a possible application of that knowledge.

As usual, all the musical ideas and concepts listed serve as an inspiration to help you write more elegant and sophisticated music. Let's start with writing out the scale first.

So, there are three possible pentatonic major scales hidden in any Lydian, and as a quick recap, they are located on the scale steps 1, 2, and 5. Why don't we bring in a bit of that pentatonic flavor and build three-part structures on top of the scale tones?

See that we are playing all of the three pentatonic scales on top of each other? All of those colored structures move in parallel and create a vertical structure that is a "2+5" (just start from the bottom note and move two half-steps up, and from there move another five half-steps up).

Now is a good time to leave the Diatonic thinking and bring in a bit of intervallic fairy-dust on top! You see that we've created five "2+5"-structures, right? Let's use some extended roots and a whole bass section to these structures via this great intervallic quick win:

Quick Win: A "2+5" (or any of its position changes like "5+5" or "5+2") has three possible extended root tones, which are located four half-steps below each note!

These structures sound beautiful, elegant, and colorful. And even more critical, these extended roots connect seamlessly to the world of pentatonic and the Lydian mode at the same time! This quick win works with every "2+5", no matter the overall tonality or key. It's a fantastic and rapid way to enhance the Diatonic sound by counting down four half-steps from each of the notes included in the "2+5"-structure.

Don't worry too much about doubling or the actual voicings for now. We can move things around quickly and use substitute tones to avoid doubled notes later.

Remember that we started on a major scale over the C root tone, and now we play the notes Ab, Bb, and Eb as root tones, but none of these tones show up in the Lydian mode over C. In the treble clef, we can still think in the Church mode, but the bass section works separately as an extension. Your advantage as the creator is that you only deal with simple triads in all places. However, they weave together to sophisticated and colorful sounds.

You always want to stay simple in your thought process! That is what will make you into an efficient and successful composer, and that is also exactly what we teach inside the Academy.

It's time to take some of these ideas and turn them into actual music. For the sake of simplicity, I'll start with the C Lydian scale and the extended roots below the "2+5"-structures.

Combining proper composition techniques with your emotional decision-making is a very efficient process to get to beautiful results. So, here's what I did. I used the exact same three steps explained above to gather some materials.

Next, I wrote out all three extended roots to all "2+5"s in there and, finally, developed this material into a quick sketch and a piano piece.

In the video below, I talk you through the sketch and my decision-making so that you get a more transparent picture of how you can use this knowledge and turn it into action as well!

All members of our Academy get access to a beautiful bonus upgrade to this article, which is an exclusive behind-the-scenes video (one hour long) that shows me, Frank, create this piano piece in real-time from scratch. No cuts in between, no safety net! I walk and talk you through the whole process and comment on my decision-making. You'll learn how and why this all works!

(If you are not logged in, it won't work, but I know you'll try anyway!)

The Lydian mode is essential to music theory and probably a way more practical point of reference in music composition than the other Church modes, particularly the Ionian. Here's a quick list of takeaways for you so that you become a more mature and sophisticated composer:

As the Lydian scale leads to so many opportunities, you might get carried away easily. I recommend you focus on the connection to the world of pentatonic first as those "2+5"s not only sound great but also let you connect to triads very quickly. They can be explained as sus2 or sus4 triads if you want.