Tonal centers in music are similar to the different chapters in a book. They define the frame and let the reader/listener develop an idea of the story. Just like the author of a book, you want to be able to change the setting and have various scenes (or storylines) in your musical work.

The elements that define a tonal center are harmony and melody. Usually, the chords over scale step I, IV, and V are enough to set the musical key. All of these steps are neighbors on the Circle of Fifths. Melodies get their shape because of rest points on a scale. The strongest rest points outline the basic triad over the tonic (scale tone 1, 3 or -3, and 5).

Example: If C was the tonal center, then the strongest rest points are the notes C, E (or Eb), and G.

Scale steps I, IV, and V

Let's start simple and pick the Ionian mode over a C root tone. On all of the scale steps, we can build triads using only scale tones. Here's the result.

The essential steps for a tonal center are I, IV, and V because those triads create authentic and plagal cadences to the tonal center. When we bring up the Circle of Fifths (Root Cycle 5), then it becomes apparent that those root tones from scale steps IV and V surround the tonic - they are neighbors. 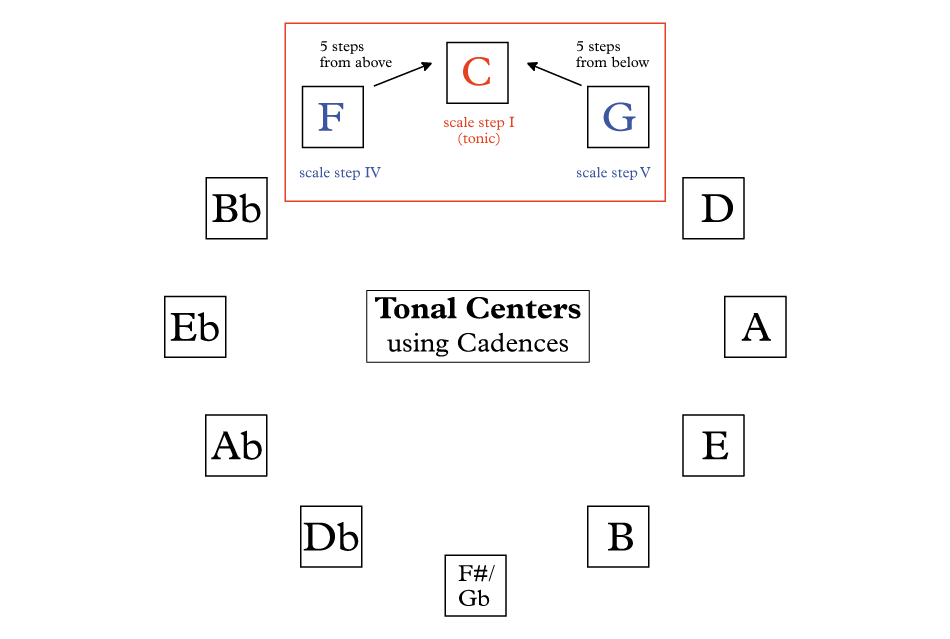 But why is the middle note the tonic? Why can't we say that the other notes become the tonic instead, like the G, for example? Let's have a closer look at the chromatic distances between all the tones, and it becomes apparent that there's a symmetry to it. We want to hear C as the logical tonal center because the F and the G share the same distance to the C but in opposite directions. This symmetry makes the whole constellation stable, and that's why it sounds good to our ears.

The tonic is an essential part of the tonal center. It's like home, and the other chords (in that key) set up a musical journey that wants to resolve back to the tonic. It's not only logical but also satisfying to hear the tonic at the end of a chord progression. This knowledge connects directly to musical storytelling. And never forget that you can always move contrary to a resolution - you can even bring in a deceptive cadence to leave it a bit more open so that you can pick up that storyline again.

The tonic can work technically in the context of cadences and resolutions, but it also can inspire you to explore some other creative musical places.

The RC5 outlines your essential harmony for tonal centers. Whenever you pick three neighboring steps from the Circle of Fifths, you've just created a tonal center with the tonic being in the middle. Let's make this all more musical and add major triads on top so you can hear how familiar this sounds.

In the example above, we've established a musical key, which is C major, using the Ionian scale. Every major key has a relative minor key, which uses the same number of sharps or flats. Or in other words, relative keys are based on the same key signature. All the notes stay the same, but because we shift the tonic, the arrangement of the notes change.

You always find the relative minor key to a major one by going down three chromatic steps from your major tonic.

That is useful knowledge as it enables us to enhance our cadences into more extended and more colorful progressions - all based on the same notes. We even give the impression of maintaining the same tonal center, which is actually not true as we move to a new tonic!

Let's see what chords we get from the relative minor key so that we can add them to our palette.

If we considered the relative minor key as our point of reference, everything from the major key applies in the same manner. We can create cadences based on the tonal center of A, and this way, define a neighboring tonal center like shown in the graphic below.

If you aim for a career in Pop music, stop reading this article right now because essentially, this is enough knowledge about music theory to write a bunch of number one hits! :)

Here's a quick recap of what we just did. We've used only authentic and plagal connections to establish the relative minor tonic.

Let's come back to the C Ionian scale. With the help of the relative minor structures, we've opened up almost all the triads from our original starting point so that we can use them in composition.

You can use the triads over the same scale steps as substitutions to color up your cadences. So, here are all the triads based on the C Ionian scale.

Let's skip over the diminished chord on scale step seven for the moment as this opens up many other great musical opportunities that we want to cover separately.

This even explains why the authentic cadence is so strong in music! You've heard the progression below a million times, and it still works because it sounds good!

So, once we've declared the tonic of the major key, all these other chords from the relative minor become available, and we can use all of them to reinforce the current tonal center.

Remember that when we change the tonic, all related chords change accordingly with it. This is very powerful as it lets you move freely through different key signatures without leaving the Diatonic point of view. It's more practical to think of temporary tonal centers as opposed to one musical key that you base your whole composition on.

Now the big question is how to modulate from one tonal center to the next most elegantly. There are a thousand ways how to change tonal centers, but here's one of the most common techniques.

Here's an example of the process. For the sake of demonstration, let's pick two tonal centers randomly, C major and E major. Next, let's use the technique described above to transition from the first one to the second and back. So, here's the pool of chords on both tonal centers that we can use. 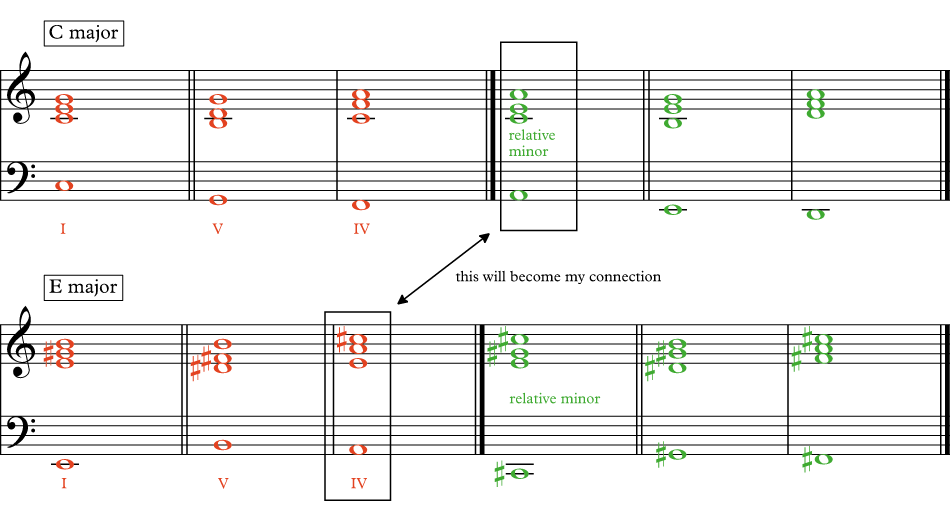 Now that we've defined the musical colors, let's create a sketch next. As usual, we want to keep it simple. Just write down whatever is essential to develop this idea into a more significant piece of music. In our case, it's just the chord progression that we will be using later. We are going to add some lines and other functions as we go. So, here's our sketch. 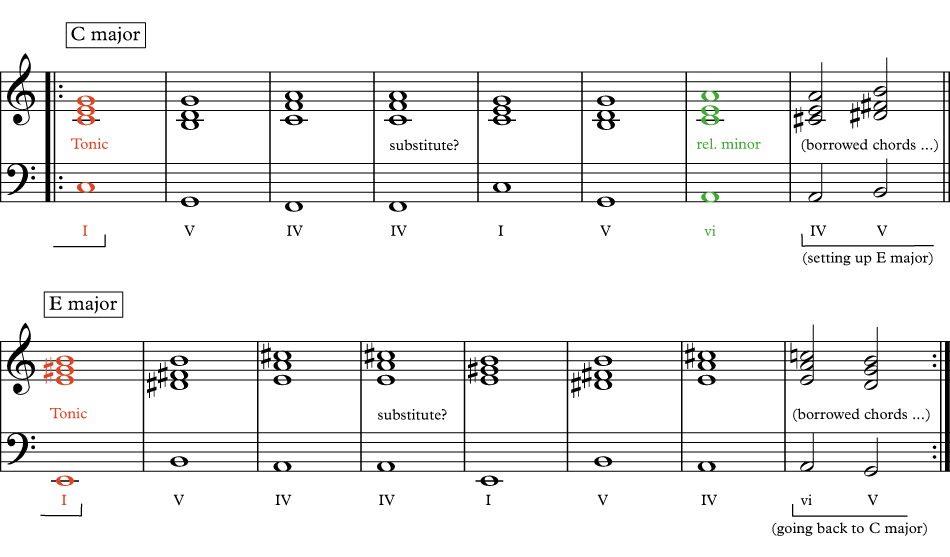 Note: You might have recognized already that we don't follow proper voice-leading all the time. Sometimes, we decided to go with parallel voice-leading instead as it sounded better. But don't worry too much about voice-leading right now but focus on the scale steps and how we transition between the tonal centers.

Developing the Sketch into a finished Piece of Music

Now, let's turn the draft into something more sophisticated, but still, following the same chord changes. Take into account that this is the moment where you want to bring in your voice and emotional decision-making combined with technique.
There are a million ways how to orchestrate an idea, and this makes it fun! But we don't want to step into the orchestration in this article. Instead, we want to stay on topic and focus on how the change of those tonal centers work in the following piece of music!

Marc Bercovitz, a graduate from the Academy's Composition Course, was so kind and did a quick development of the sketch.

Do you want to see the orchestral score? You can download it right here!

Did you recognize how Marc uses the modulation from one tonal center to the next to bring in new colors and variations of the same elements, like the melody or the arpeggio that enforces harmony? This all is a technique that will push you forward quickly. You want to give you some musical inspiration so that you can make a choice based on your emotional response! In the end, it all comes down to what YOU want to hear out of the sketch!

You know that these articles are all about how to write music efficiently and with a process in mind. Writing such a sketch won't take long, probably you will have it done in less than 10 minutes.
The problem is not the sketch, but the coordination of your steps and options that come after the sketch.

... how do you compose such a piece in around two hours?

The secret is to divide the big problem into many small ones, which you can tackle one after another. Here are some of these problems ... to give you an idea.

Once you know the answers to some of these questions, the next steps start to fall into place naturally.

Do you still remember that on top of this article, we said that different tonal centers could work similarly to having different chapters in a book? Actually, this is an implicit description of letting your musical ideas follow some form.

If you just scanned this article quickly, please take this one thing away from it as it will make your writing more sophisticated and exciting:

Tonal Centers can help you structure your work and define smaller blocks that you can and should re-use in the later development of your piece.

Think in a strategic way when you compose and orchestrate as it will accelerate your overall process - this is what we teach and how we help music creators inside the Academy.
Although creativity needs attention as well, most often, composers get stuck in the process and, as a result, run into writer's block. It's not because they don't know how to come up with a melody, it's because they are not able to decide on what to focus next.

The "Technical Aspect" of Tonal Centers

Although we base this article on music creation, let's go quickly into some of the technical aspects of tonal centers as well.

Some instruments simply sound better on specific tonal centers because of their design. Take the brass section, for example. The trumpets and the horns usually sound great in flat tonalities (like F major, Bb major, or Eb major). When you look at some scores, you probably saw already that there are notations like "Horns in F" or a "Bb Trumpet". Then, some of the woodwinds also come with their tonal centers. They are transposed instruments (like a clarinet in A).

Some instruments have favorite tonal centers.

That is the register where the musician has the most control over intonation, articulation, dynamics, and expression. By shifting your melody to different tonal centers, you can help the instruments shine in their cash register when you want them to play a solo. You want to take this into account when you compose the music as it will affect the orchestration later.

Professional musicians usually won't have any problems playing in any tonality, but unfortunately, we don't have the luxury of working with pros all the time! For that reason, you want to focus on parts that are easy to play on particular instruments so that you help the musicians give you a better performance in the recording session.

Tonal centers are essential in music, and you need to know how to use them in musical storytelling because your audience will recognize them emotionally. Here's a quick summary of what we've covered so far.