​The tritone substitution is a common technique used in Jazz Theory to add some color to a dominant seventh chord. But once you understand the interval relation in that substitution, you can expand that concept to other vertical structures as well. So, let's find out how Interval Theory opens up some great musical opportunities.

​The tritone substitution refers to the bass note of the dominant seventh chord. A tritone equals six half steps or three whole steps, and if we move up (or down) this exact distance from the dominant root tone, we get to the note that we want to use as the substitution of the original root tone (like Gb below a C7 chord or Db below a G7).​​

​The definition above gives good advice about what to do in the bass, but why does this work?

To understand the interval relation behind the tritone substitution, we need to look closely at the critical scale tones that make up the dominant chord structure. So, let's reduce the number of voices to a minimum first.

A dominant structure is not stable and wants to resolve to its tonic. Usually, that's the neighboring step on the Circle of Fifths (RC5) in the counter-clockwise direction.

The minimum number of voices in a dominant structure needs to be two, next to the root tone. We end up with scale tones 3 and -7 above the root. Both tones appear in the third octave of the Harmonic Series and, therefore, are natural overtones of the fundamental.

The resolution of this 2p-structure equals the authentic cadence and sounds very natural to our ears. Both scale tones become leading tones that resolve chromatically into the next step of the RC5.

Now, let's bring in the tritone substitution in the bass. As a result, we still create a dominant chord structure that exists on the same pitches, but the scale tones have switched places. Scale tone 3 becomes -7 and vice versa.

The reason why this works lies hidden in the distance of the scale tones to each other. They create a 6-interval (a tritone) as well, and this causes one scale tone to fall on the other one. Let's bring up the Harmonic Series on a Gb fundamental and see if we can spot this 6-interval in there.

And this not only works with scale tones 3 and -7 but with any combination of tones that are in a distance of six chromatic steps to each other. Below, we go through some examples.

​The Diatonic system limits the term "tritone substitution" to a dominant seventh chord only, but it goes beyond that. Now you know that this concept works with every 6-interval in the treble.

​Let's move up to three parts. Of course, we will be using our two crucial chord tones 3 and -7 so that we maintain the dominant flavor, but in addition to that, we bring in scale tone 5.

This time, when we apply the tritone substitution, we actually change the chord structure and the chord complexity. This becomes more apparent when we look at the notation.

​In essence, we switched from a dominant seventh to a dominant flat ninth chord. By splitting the root, we've increased the chord complexity and moved into higher chord tones.

​Note about 13s: Probably you've heard us say in other materials that it's a great idea to avoid 13s! Those are two tones that appear in a vertical distance of 13 chromatic steps to each other (or in any octave positions above)​.

One exception to this guideline is the dominant flat ninth chord! The 13 between scale tone -9 and the root works because scale tone -7 gives support and musical context to the -9.

Did you know that we can achieve the same change in chord complexity by moving to a position change (PC) in the treble? Let's have a look at the original structure first and then apply the PC. This brings out the intervallic formula of each structure clearly.

​Always read the interval formulas from bottom to top!

​When we split the bass, we moved the root tone six chromatic steps (up or down). But we can also stick to the same root and move the treble structure by 6 instead!

So far, there's no PC involved so far since we only moved the whole structure in parallel (see below). But let's determine the overlapping tones in a dominant seventh and a dominant flat ninth chord (using the same root).​

​Both chord structures belong to the same family that we call the "equivalents". These are vertical structures that show an equal distance between all the tones involved. In our case, it's 3+3.

​We want to start our observations by extending the 3+3 equivalent from three to four parts. Hence, we end up with a 3+3+3, which equals the dominant flat ninth chord from above but using all the parts available within one octave​.

Since the dominant flat ninth chord is complete with four parts (a fifth part would double the lowest voice in an octave position), the PCs will always remain 3+3+3. And whenever we remove one of the four notes in that structure, we go back to three parts, and land on one of the various PCs demonstrated above.

​Let's stick to four parts as we can even create a richer and more colorful chord structure using this structure as our starting point. Look at the 3+3+3 below, and you'll see that we've color-coded the two separate 6-intervals.

Now it's time to flex our interval muscles! When we move the lower 6-interval one chromatic step up, we create a dominant flat thirteen chord! It's a 2+4+2, see it below? And we can even get to the same formula by moving the upper 6-interval down by one chromatic step. The only thing that has changed is the root tone of the thirteenth chord. 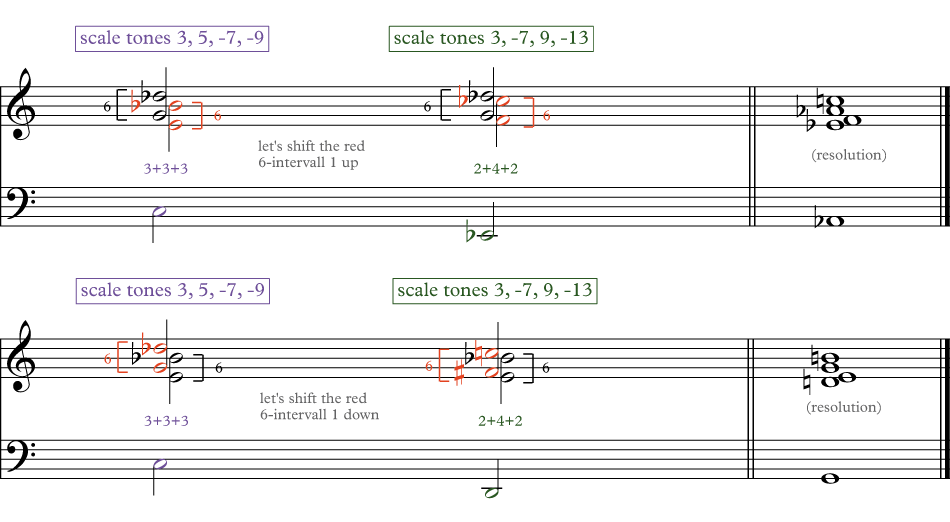 ​By the way, that's a fantastic way how to move elegantly into different tonal centers. It's almost like musical Judo! Above, we just modulated from C major to Ab major! You can guide the force elegantly into any direction you want with minimal effort as all parts move chromatically into the thirteenth chord.

And since this thirteenth chord uses only two sets of 6s, we can go to the tritone substitution, and it won't mess around with our scale-tone pitches! That's pretty neat (and actually, pretty advanced Jazz Theory)!

​Now, it's time to put these musical concepts into action. We want you to be able to apply these substitutions, no matter your artistic level of education.

For that reason, we want to structure the process into individual steps that everybody can follow quickly and easily.

​Create a (simple )chord progression to your liking.

​Decide where you want to insert the dominant structures after you've written the basic progression. It's important to write the dominants in reverse (that's from right to left) from the final chord that you want to move into. In the bass, you can lead into the final structure via a 5 from below or a 1 from above (that's the tritone substitution).

​Now that we've completed the basic sketch, let's develop this all a bit further.

​If you want, orchestrate it to your taste (which is an entirely different subject, and therefore, we won't cover that in this article. But it's also one of the subjects that go into very deeply and teach inside the Academy​.

​Let's see how these steps relate to actual music. Below, you see a possible application of those steps. Take into account that the last bar uses substitute voice-leading​. This was an emotional decision. 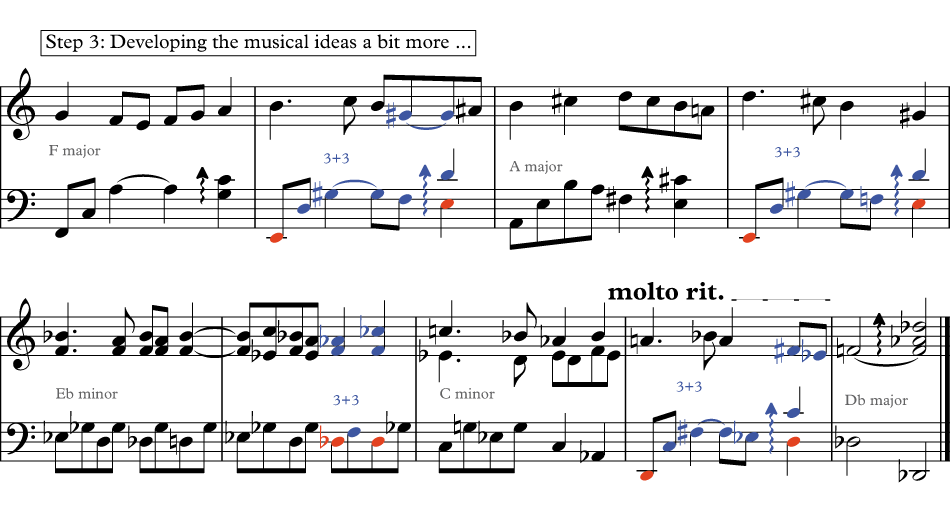 ​The quick development of such an idea won't take you longer than around 10-15 minutes, depending on how much detail you want to add. This is not the finished piece but a pretty solid starting point, at least for a few minutes.

Imagine how many bars you could finish this way every day! Your output can increase quickly, and at the same time, you reduce the stress on yourself as you are following technique. In the end, it's all about making emotional decisions based on your taste. Give yourself some input to listen to, though, and let your ears decide what's going to make it into the final result.

​Again, the Diatonic system offers a pretty good starting point on how to use the tritone substitution, but it's just the tip of the iceberg. That's typically the moment where Interval Theory comes in very handy and leads to a different perspective, which often results in fresh musical ideas and overcoming writer's block.

We want to equip you with the most elegant tools and musical solutions that are practical and helpful in your daily work routine. And the content of this article is just a tiny fragment of what is all available to our members inside the Academy.

So, here are the main takeaways from this article that we want you to remember.

​Be aware of the emotional reaction that you are getting from the tritone substitution! Sometimes, it will appear as the best musical solution ever, but in other moments it can feel like an emotional hard-cut.

It's best to bring in and combine those musical elements that make sense to the story that you want to tell.